How to Profit from News Breaks, Part 1

From time to time, you may have heard or read a news account of a market development along these lines: “Despite a jump in the discount rate, stocks rallied sharply on Wall Street,” or, “IBM announced today that earnings were up 10%, but IBM shares declined by $1.50.  Analysts were at a loss to account for this reaction.”  These reports are typical of the way any market might react to news.  This type of seemingly irrational price action is certainly not the sort of thing that a logical person would expect to happen, though.  If the news is good, presumably the stock should go up and if it is bad, certainly, then, it should go down.

These seemingly inexplicable reactions occur because the market or, we should say, market participants, are always looking ahead and anticipating all facets of the news and the events behind the headlines.  Consequently, when the IBM earnings were announced, the figure was something that most observers had expected and so, they had already bought the stock.  Some, who were not aware of the “good news,” decided to purchase on the announcement.  Others, however, had been waiting for that exact moment to unload the stock and used the IBM earnings report as an excuse to sell.

Occasionally, these types of announcements will generate greater buying strength, in which case, the stock may close the trading day up in value, but probably well down from the high achieved just after the announcement.  No matter. Most people expected the news and had decided to use the event to unload stock on those individuals or institutions that were unexpectedly impressed with the earnings report.  Why?  Perhaps these same investors believed that this represented a peak in earnings for a while.  The announcement was, therefore, a God-given chance to sell into strength at a very favorable price.  In any event, from the point of view of the market observer, the key is that the news was good and, therefore, the stock ought to have risen in value.  That it didn’t was a sign of weakness.  After all, if the price is unable to rally on good news, what would induce it to go up?  This is a very difficult concept for most people to grasp, even those with many years of experience in the markets.  If the news is good at the time, it always seems foolish to sell, but in retrospect, that is usually the smart thing to do.

On the day of the August 1991 coup against President Gorbachev in the former Soviet Union, the gold price ran up $4 to $6 during the morning but closed the day in New York only 50 cents higher than its value at the start of the day.  This was two days before the coup collapsed, so there was still plenty to worry about.  Few observers would have guessed at the time that the revolt would soon be over. The gold price, which was moderately oversold at the time, ought to have had a field day, since it almost always responds positively to disquieting world events.

In the inflationary 1970s, such news could have been expected to result in a $20 to $30 increase.  As that first day of the coup came to an end, there was a great deal of uncertainty and the price barely budged.  The event was totally unexpected by the market, so it could not be argued that the coup had been factored into the price.  No, there was clearly something bearish in the supply-demand relationship.  Buyers were not being enticed back into the market by this “bullish” news for the metal, but sellers were there ready to offer all the gold that anyone wanted.  The failure of the price to rally on the good news was a bearish sign.  Later that week, the coup failed, and the price continued on its way down.  It didn’t decline that much and eventually returned to the pre-coup levels, but from a short-term point of view, selling on “good” news was the correct thing to do. 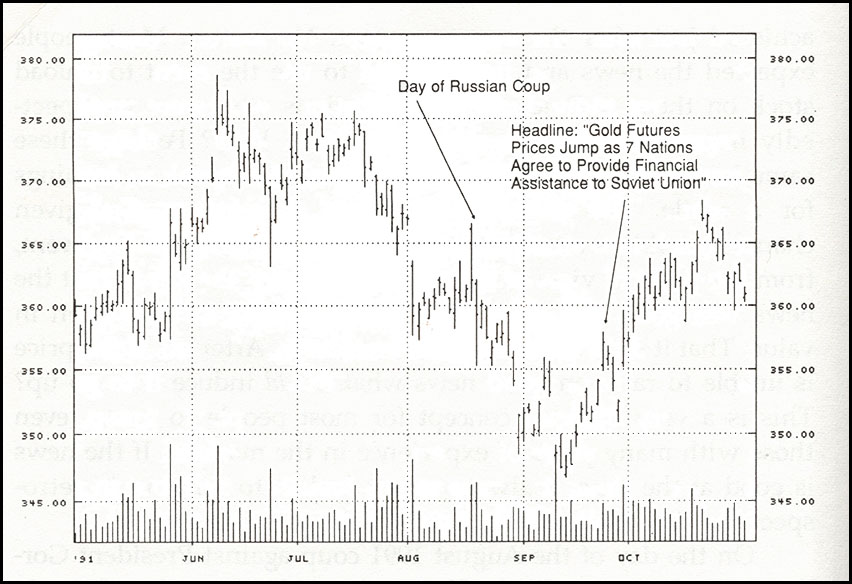 All financial markets look ahead in an attempt to anticipate future events.  This practice is called “discounting.”  At first, this process involves a few farsighted individuals who have a good sense of the chronological sequence of events that usually transpires in a typical market cycle.  Such individuals also have experience in gauging how the perceptions of other market participants might change as events unfold.  As time passes, the probable outcome becomes more widely expected and, therefore, discounted by more and more people.  Finally, the event takes place or is announced, and participants start to anticipate the next one.  This is a simplification of what actually takes place since prices are determined by the interaction of a number of different events, economic trends, and psychological background factors.  If it were possible to isolate the discounting mechanism to one two events, forecasting any market would be a relatively simple matter because everyone would play the same game, meaning that the discounting process would be instantaneous.

Academicians have long claimed that financial markets are efficient.  The efficient-market theory states that a specific market or security digests all the information likely to affect it, so that this knowledge is immediately and efficiently factored into the current price.  Proponents of the theory claim that it is not possible to make money in the markets by anticipating events because they are, in effect, already accounted for in the prices.  The markets, they conclude, are, therefore, a “random walk.”

I cannot disagree with the hypothesis that markets are, to some extent, efficient.  Anyone who believes that the earnings of his favorite stock are going to plunge would be illogical if he did not sell at least part of his position and buy it back later at a more favorable price.  There are two flaws in the efficient-market hypothesis.  First, the same information is not given to everyone at the same time. News takes time before it can be widely disseminated.  Second, not everyone will interpret the information the same way when it is received.  Remember, for example, how most people take the news at face value, while the contrarian will look behind the headlines to see whether there are any reasonable alternative scenarios to those being followed by the crowd.

Let us take the example of XYZ stock.  For the past six months, XYZ has been trading in the $10 to $12 range.  One particularly bright analyst discovers that the company will soon be in a position to cut costs dramatically because of a new product that it is about to introduce to the market.  As a result, he starts to recommend the stock to a few of his select clients.  This incremental demand is enough to push its price above the $10 to $12 trading range.  Other analysts gradually pick up the scent and the price advances a little further.  Then, the company announces some unexpectedly bad earnings and the price slides. Miraculously, the decline is very brief, and the price again resumes its advance. This occurs because the knowledgeable people who are aware of the forthcoming development see the decline as an unexpected opportunity to pick up some stock at what they consider to be bargain prices.  One of the key points to grasp here is that a market or a stock that can quickly absorb bad news is usually in a strong technical position.  Such action, in effect, represents a very positive sign.

Later, more investors begin to hear about the company as retail brokers spread the news to their customers.  During this whole period, the price continues to advance.  Consequently, by the time the company is ready to make the announcement, almost everyone is expecting it so the news comes as no surprise.  When the product introduction finally appears in the newspapers, the event is common knowledge.  Only newspaper readers who have not previously been privy to the information are likely to be buyers.  After that point, there is no one left who is likely to make a purchase based on the news.

The other principal reason the efficient-market theory is flawed is that prices are determined by the attitude of market participants to expected future events.  Many people react to news in a knee-jerk fashion and others take the time to reflect.

The fact is investors in the stock market tend to be very fashion conscious. They were prepared to bid up the prices of technology companies between 1982 and 1983, but a change of attitude meant that high-tech stocks were out of favor for the remainder of that decade.  Food stocks saw consistent growth rates in the 1970s; yet, they did not find favor with investors until the next decade.  The only explanation for most of these apparent inconsistencies is investor attitudes, not efficient-market theory.

Sometimes, the market’s response to news is delayed.  In October 1973, the Organization of Petroleum Exporting Countries (OPEC) announced an embargo on oil exports to the United States because of America’s support for Israel in the Arab-Israeli war.  Logically, the market should have declined immediately, but it actually took several days between the announcement of the embargo and the start of the dramatic stock sell-off that followed. The facts were known, yet people did not begin to react immediately.  Eventually, attitudes changed and prices sank.  Another example occurred in December 1991, when the Fed lowered the discount rate by a huge and unexpected 1%.  The market immediately responded with a small rally that day, but the explosion in prices did not occur until later.  On the other hand, the market’s response to Saddam Hussein’s invasion of Kuwait was more or less instantaneous.

The efficient-market theory makes no allowances for these idiosyncrasies of human nature.  There is no question that markets have a tendency to be efficient, but the examples cited here indicate that efficiency alone cannot account for all the causes behind price movements.  Markets are usually efficient in the sense that it is very difficult to prosper from specific announcements that have a reasonable chance of being foreseen.  A substantial amount of research has been done on this subject.  One study at the University of Notre Dame, by Dean Frank, Frank Rielly, and Eugene Drzyminski, indicated that stock prices rapidly factored in new information on world events.  The speed at which this happens keeps investors from raking in above-average returns based on such information.  Other studies have also concluded that attempting to capitalize on public announcements, earnings reports, and the like, have little chance of beating the market.

The problem with any of these research efforts is how to quantify the importance of a news item.  It may be a bullish, but more or less insignificant item and, thereby, have little or no effect on the price.  On the other hand, much of the news may already have been leaked.  Quite often, companies will “prepare” analysts for a forthcoming development of which they were previously unaware.

In this respect, Dr. Patrick Gaughan, at Fairleigh Dickinson University, showed that the closing value of stocks was not related to news published on a specific day in The Wall Street Journal.  Instead, using multivariate analysis, he was able to show that prices one or two days prior to the publication of the news were statistically related.  Drawing on these data, he concluded, “It is not that news in daily financial publications does not have an impact on security prices.  News is most important to these markets.  However, the markets often have access to more timely sources of news than the printed word.”  In this short-term study, Dr. Gaughan, therefore, proved the point that markets usually factor in the likely effect of a news announcement before it happens.

Related Article: How to Profit from News Breaks, Part 2